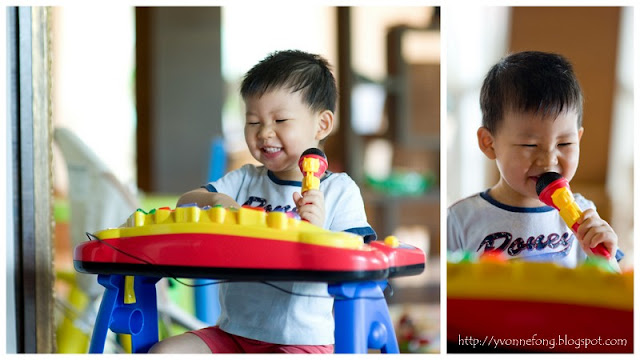 I bought this piano toys for quite sometimes but been keeping it.. and when we give him to play.. he was so excited about it and singing with it too..

have been long time didn't update about Marcus.. he is a big boy now.. he has his own thinking and idea on what and how things are done.. he will cry all out if things not done according to his will.. but he is still my lovely boy.. i love him to max..
School life: he enjoyed his school life.. but refuse to wear school uniform at home in the morning.. so mummy still changing him in the car every morning.. since May 12 teacher told me he start to make some noise in the class which is very good improvement as prior to this he is very quiet at class.. he will joined and play with other kids also recently.. am looking forward to the teacher-parent meeting before the holiday.. hope to hear some improvement he has in school from the teacher..
Speech Development: he non-stop bubbling and sing sing in his own language at home.. he can say BYE BYE, SEE YOU, and HI (loud and clear and he does mean it).. occasionally will hear him count 1,2,3 and ABC on his own.. but when we ask he won't repeat.. I hope he can really catch up with his speech development very soon.. he is still very quiet if there are strangers around..
Potty Training: he has been potty trained for Day time for abt 8 months.. now he can go to toilet on his own..   remove his own pants, wear his own pants and underwear, also wash his own hand after that.. he will make one kind of noise to let me know he want to poo poo even now.. :)
Social skills: since after i started the playgroup and he attended play school.. he now will play with other kids.. he will chasing and laughing out loud.. he will pass his toys to others to play.. he is no longer a very very shy boy.. but he is still shy compare to most other kids..
Eating habit: his eating is the most headache problems we have since we first start introduce semi solid.. also maybe because of his eating problems.. that's why he has speech delay.. so we have been starting him on rice meal everyday now.. hoping he can chew and eat better at the same time he can exercise his oromotor skills..

My 3 year old girl is also very shy. Talkative among family members, but will hide behind me in front of strangers lol. I hope one day she'll be more brave and socialise more :)

Hi Yvonne, I found your blog yesterday (from my googling about kindergarten nearby). I discovered Lil Marcus this cute boy, and I think Marcus is older than my daughter 2 months (she's Dec 2009). Hunting for kindy really not an easy job for me (currently we are staying in Bdr Puter, Klg and am fr PJ, had no idea any good kindy nearby) I went Real Kids b4, bull it has fully taken on July 2012 class, thinking to enroll my daughter beginning of 2013, sends her to nearby Kindy for a this coming 3 months first. May I know how's Marcus's Kindy? Wish to get different opinion from mothers. Thanks ya ^ ^