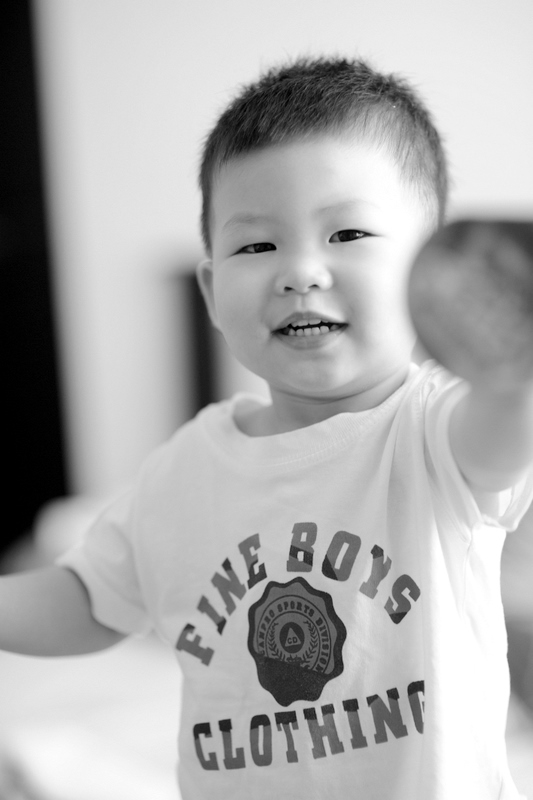 Physical - he now can jump a little bit by lifting his leg off the ground.. but still not an expert.. he walk up stairs like an adult.. he can hold the side and walk up and down the staircase on his own.. he is basically climbing up and down like a monkey..

Language/speech - recently he mumble a lot.. he start talking as if he is really talking to us.. but just we don't understand him.. he can express what he want clearly even without talking clearly.. but he does understand what we talk to him..

Sleep - he still taking 2 naps a day.. around 12pm (about 1-2 hrs) and 5pm (about 1 - 2 hours).. then he sleep at night at 10.30pm - 11pm then wake up next morning around 9-10am++.
Eating - Teething - just left the 4 big tooth at the back not yet grow up.. but I also not very sure growing or not as it is so dangerous for me to check now :P.. he has improved in milk drinking.. 1 weeks before I went for delivery.. I asked maid to try feed milk from spoon.. surprisingly he drink it.. but we need to give him cartoon to watch or something to play to divert his attention.. but at least he is drinking milk.. I am so released and happy about this.. for eating wise.. it is the same.. he like to keep food in his mouth.. thus it make feeding lunch/dinner difficult and its take about 1.5hr -2hr to feed him.. and the amount he eat is not a lot!!!
Potty training - he was potty train for poo since he was about 1 year old.. but for wee wee we only strat training him when he was about 1.5 yrs old.. and the last attempt of potty train failed... so we rested for quite sometimes before we starting the training again.. about 2 - 3 weeks before my delivery.. we restart again his potty training.. instead of making him stand and wee.. we train him to sit on potty.. and now he was able to give us signal when he want to wee.. it is during his wakeful time only.. for nap and night sleep he is still on diaper..

My Marcus boy.. mama always love you.. now you are undergone the transition of accepting your newborn mei mei.. I hope you will love mei mei too.. and mama also love you the same!!!!
at October 14, 2011