few days ago I utilized the internet http://www.youtube.com find some cartoon to let marcus watch while he was playing here and kacau me too much... then i just simply click the above cartoon.. "Mr Bean" and surprisingly he like it.. he very seldom can sit quietly without moving or playing other thing while watching cartoon.. this is the first time.. he sit and wait for the whole damn 10:52 mins show.. while I don't know I should be happy or not about this.. and yet just now I let him watch while he sitting on my lap again tonight.. and he watch one after another Mr Bean series.. once finished.. then he will goes.. "hand sign - NO More??" and look at me.. then he will make the voice and talk.. "ah.. ah.." while he doing the hand signing.. asking me to play another one or again!!! But if I play other cartoon on youtube like "tom & jerry" then he will be start moving left and right.. play things on the table.. weird hor??? 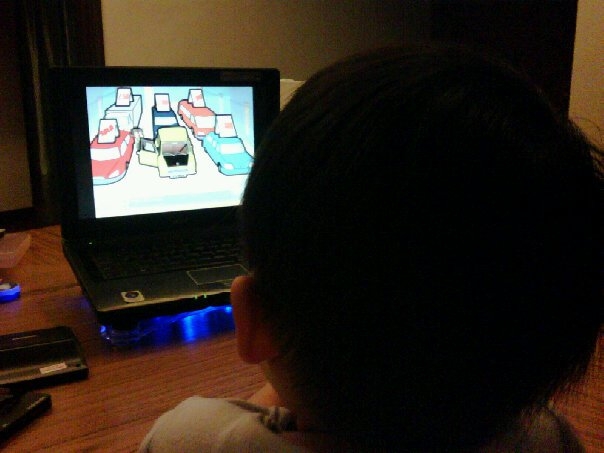 (pic taken with my blackberry phone.. while he was sitting on my laps and watching it)

I hope you also enjoy the show.. I always got let him watch cartoon like "Thomas and Friends".. "Your baby can read"... "Dora".. "tom and jerry".. and a few more.. but seem none of it can catch his attention like Mr Bean does!!
Note: I only let him watch cartoon while in the car ride.. or in the afternoon for 30min.. but normally he won't sit there and watch.. he will walk here and there while the show is on..
at May 25, 2011

Yvonne, try this link http://www.youtube.com/watch?v=SRB2YlQOSBI see if Marcus likes it.

Perhaps Marcus is learning n planning the science of using heat to run something.. Stay tune for his creativity :P